The International Air Transport Association (IATA) awarded dnata the IATA Safety Audit for Ground Operations (ISAGO) Registration in Iraq, following the successful completion of a comprehensive audit of the company and its ground-handling operations at Erbil International Airport (EBL).

“We are thrilled to mark an important milestone in our ongoing commitment to safety and security by achieving the prestigious ISAGO certification. We constantly invest in training, processes and technology and engage our highly-skilled people at all levels of the organisation to deliver world-class safety for our customers. The successful completion of IATA’s comprehensive audit demonstrates our ability to consistently achieve the highest standards across our operations.

“I thank our skilled team for their hard work and dedication. We continue to go the extra mile to provide service excellence to our customers, every day.“

dnata provides ramp, passenger and cargo handling services to more than 40 airlines in Erbil. The company’s customer-oriented team in Iraq consists of over 300 highly-skilled aviation professionals, who assisted 1.8 million passengers and ensured the smooth and safe operations of 10,000 flights in 2019.

ISAGO is an audit program for ground-handling companies serving airlines at airports covering the areas of organization and management, load control, passenger and baggage handling, aircraft handling and loading and aircraft ground movement.

The U.S. Consul General in Erbil, Steve Fagin, met virtually with Dr. Ridha Hassan Hussein, President of Sulaimaniya University and students to discuss future academic collaboration, the impact of COVID19 and recent activities organized by the American Corner in Sulaimaniya.

Consul General Fagin encouraged the university students and staff to apply for exchange programs sponsored by the U.S. Department of State.

The U.S. remains committed to building academic linkages between U.S. institutions and universities in the Iraqi Kurdistan Region.

(Source: US Embassy in Baghdad)

By Adam Lucente for Al-Monitor. Any opinions expressed are those of the author, and do not necessarily reflect the views of Iraq Business News.

Ferhat is an English teacher at a public school in Erbil, the capital of Iraq’s autonomous Kurdistan Region.

His salary comes from the Kurdistan Regional Government (KRG), but five months into 2020 he has only been paid his monthly salary twice. Payment problems over the years forced him and other teachers to take on second jobs.

“It’s very difficult for us,” Ferhat told Al-Monitor. “Each one of us has to work after school to live.”

Egypt-based GB Auto (Ghabbour Group) has been appointed as the distributor of the Chinese-owned MG car brand in Iraq.

According to Trade Arabia, the new partnership will see six MG showrooms opened across the country, in Erbil, Baghdad (on 62 St and at Baghdad Mall), Duhok, Sulaymaniyah and Basrah.

Operations are expected to commence in late-Q3 or early-Q4 of this year.

Prime Minister Masrour Barzani chaired a cabinet meeting in Erbil on Wednesday to discuss economic conditions in the Kurdistan Region and outstanding problems with the federal government.

In the meeting, which was also attended by Deputy Prime Minister Qubad Talabani, the Prime Minister wished success to the new Iraqi cabinet, and stressed the need for a constitutional solution to ongoing issues between Erbil and Baghdad.

Prime Minister Barzani said the Kurdistan Region is going through difficult economic times due to falling oil prices and the impact of the coronavirus pandemic, and must make adjustments due to limited financial resources.

He called for a review of the economy in light of the regional financial downturn, and underlined the importance of continuing to implement the Reform Law (2020).

The Prime Minister said the KRG will do its best to pay public sector salaries, and reiterated his commitment to continue providing public services and strengthening the region’s infrastructure.

During the meeting, Deputy Prime Minister Talabani provided an update on recent discussions with federal authorities on budgetary issues and oil exports. He said dialogue with Baghdad will continue to reach a deal on outstanding problems.

UNHCR welcomes the new contribution of USD 1.5 Million from the Government of Japan towards the response to COVID-19 for internally displaced persons, returnees and refugees in Iraq.

The new funding comes at a critical time when many communities, especially the most vulnerable, have been affected due to COVID-19 restrictions. This funding is supporting timely awareness-raising campaigns on the transmission and prevention of COVID-19 in addressing the needs of vulnerable displaced families, as well as ensuring access to basic hygiene items and protective gear for medical staff in primary health centres and authorities at border points.

Also, through this generous contribution UNHCR is supporting the Directorate of Health in Duhok and Erbil governorates to provide training on case definition and detection and management of suspected cases of COVID-19.

The Ambassador of Japan to Iraq, His Excellency Mr. HASHIMOTO Naofumi (pictured) stated “Given that COVID-19 is raging across the world, it is crucial for the international community to make concerted efforts, and I hope that the Japan’s assistance through UNHCR would help prevent further spread of COVID-19 in Iraq.”

He added “Under such challenging circumstances, I wish to engage in and strengthen a close cooperation with the new Government of Iraq in a wide range of issues”.

The UNHCR Acting Representative in Iraq, Ms. Philippa Candler, commented, “during this global crisis, we have been all affected. The effect on vulnerable communities is even more acute. This generous and timely contribution will assist in our efforts in the response of COVID-19. Ensuring the health of communities is part and parcel of protection.”

In response to the current situation, UNHCR has established procedures to continue providing services and maintain presence in the field. Under the current context, most basic services continue to function in camps and in areas with a high density of displaced populations. UNHCR also adapted its work modalities to ensure assistance continues to be delivered remotely including legal counselling, protection monitoring among other activities while respecting social distancing.

In response to the COVID-19 global humanitarian appeal, Japan has generously donated USD 23.9 million to urgently assist displaced communities around the world.

The Government of Japan has been one of UNHCR’s largest donors and supporters of many years.

By Dana Taib Menmy for Al-Monitor. Any opinions expressed are those of the author(s), and do not necessarily reflect the views of Iraq Business News.

Adel Abdul Mahdi’s Iraqi caretaker government in Baghdad April 16 has ordered its Finance Ministry in an official document to cut federal budget contributions to the semi-autonomous Kurdistan Regional Government in Erbil, pushing the KRG toward bankruptcy and cutting off the payment of salaries to its civil servants.

By Dana Taib Menmy for Al-Monitor. Any opinions expressed are those of the author(s), and do not necessarily reflect the views of Iraq Business News.

Adel Abdul Mahdi’s Iraqi caretaker government in Baghdad April 16 has ordered its Finance Ministry in an official document to cut federal budget contributions to the semi-autonomous Kurdistan Regional Government in Erbil, pushing the KRG toward bankruptcy and cutting off the payment of salaries to its civil servants.

Yazidis displaced in the Kurdistan Region of Iraq are particularly vulnerable to COVID-19. They also face a mental health crisis that the pandemic threatens to make worse.

Zaid Hamu, 31, has just heard the news that a resident of Darashakran camp in Erbil has been diagnosed with COVID-19. The case, reported on April 27th, is the first in Iraq’s camps for refugees and internally displaced people (IDPs). Zaid lives in Khanke camp with 22 members of his family. “People are terrified,” he says. “They are praying to god to protect them.”

In Iraq, 250,000 Yazidis are unable to return home to Sinjar almost six years after ISIS invaded the district and murdered, kidnapped and enslaved thousands of the religious minority, acts recognised by the UN as genocide. Most, like Zaid and his family, live in canvas shelters in large IDP camps.

Dr Nezar Ismet Taib is the Director General of Health in Duhok Governorate, which hosts 22 of the Kurdistan Region’s 38 camps, including Khanke. “People living in camps are among the most vulnerable groups to COVID-19,” he says. “They have big families living in very crowded shelters, poor sanitation, lack of awareness and many are working outside the camps. This makes it very difficult to protect them unless severe restrictions on movement are imposed.”

The AMAR Foundation runs healthcare clinics in two of the camps, Khanke and Essyan, each with a population of around 15,000. Teams are working hard to prevent an outbreak, making home visits and distributing leaflets and posters on the importance of hand washing and other protective measures.

A full lockdown in camps has been eased in recent days, but restrictions on movement are still in place. Initially, people could leave and re-enter camps only in an emergency, which restricted residents’ ability to earn. The authorities face an exceptionally difficult balancing act. For Zaid in Khanke, though, the relaxing of restrictions has left him and his family feeling exposed. 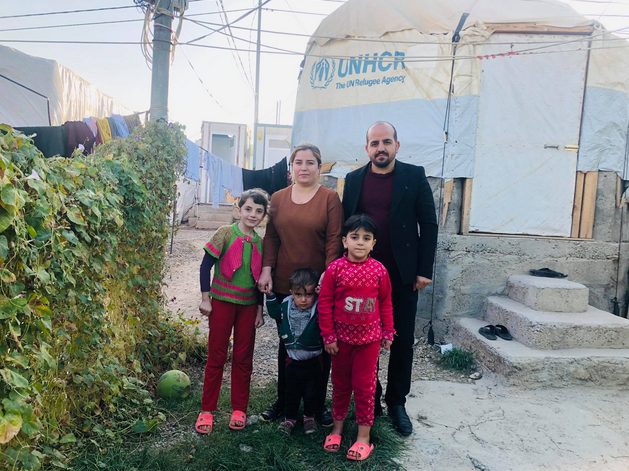 Zaid and his family outside their home in Khanke camp, April 2020

Mental health crisis could get worse

When ISIS attacked Sinjar in 2014, they killed around 5,000 Yazidis and abducted 7,000 more, most of them women and girls who were forced into sexual slavery. Thousands of children were also kidnapped. Many remain missing.

No Yazidi has been untouched by this. Those who have returned from captivity have acute, complex mental health needs requiring long-term psychiatric and psychological care that stretched health authorities struggle to provide. Mental health care capacity in Iraq is exceptionally limited. According to a study by the Enabling Peace in Iraq Centre, in 2017 there were only 80 working psychologists for the whole of Iraq.

The provision of psychosocial support services, which attempt to make up some of these gaps, has already been affected by restrictions on movement imposed as a result of the virus. According to the International Organization for Migration, 45% of these are currently closed in Iraq.

Psychiatrist Dr Adnan Asaad Taher leads AMAR’s mental health programme in Essyan camp. He says that the team have had to scale back home visits, but psychotherapy sessions for the most severe cases continue.

“Residents of these camps have already witnessed large-scale trauma; the COVID-19 pandemic poses another potential trauma for many. With the spread of false information on social media, camp residents are faced with uncertainty,” Dr Adnan says. “They also face isolation and fear falling ill and losing loved ones to COVID-19.” 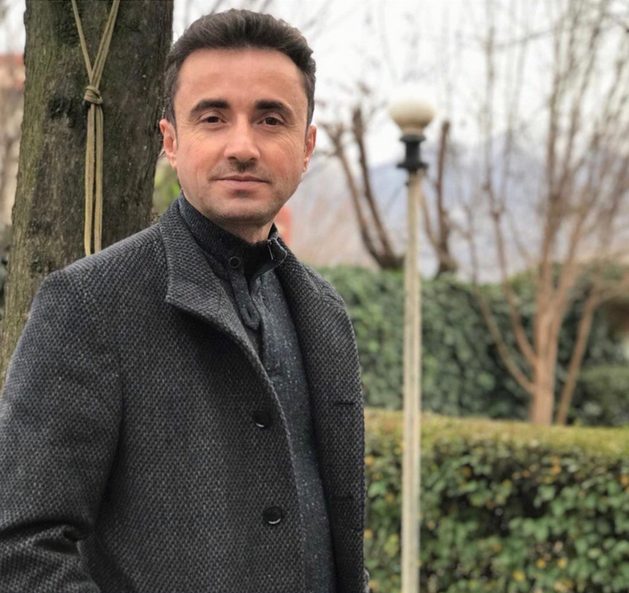 Dr Nezar, himself a qualified psychiatrist who treated the first Yazidi women and girls to escape from ISIS, is also concerned. “In our last mental health working group, many of our partners reported an increased number of suicides and other serious mental health problems among IDPs.”

He also believes that in the longer term “there will be a negative impact on general health and mental health services for victims of ISIS, especially ISIS victims of rape, who need more consistent and long-term mental health care.”

The diversion of healthcare resources to fight the virus and the impact the pandemic is having on the already struggling Iraqi economy are likely to limit the ability of the authorities to scale up mental health treatment. AMAR’s programme in Essyan will continue, but thousands more Yazidis need access to this kind of psychological support.

Displacement will last for many more years

For most Yazidis there is little prospect of a life beyond the camps. Although some, like Zaid, dream of a return to Sinjar and the “simple, happy life” they had before ISIS, the region’s disputed status and the presence of various armed factions make it too unsafe and have hindered reconstruction efforts. With authorities now preoccupied with the pandemic and its economic consequences, the situation is unlikely to improve.

It is therefore vital that, as countries look to battle their own internal crises, the international community does not forget the Yazidi people recovering from genocide and facing this pandemic in ever more intractable displacement.