Prime Minister Mustafa Al-Kadhimi chaired on Monday a meeting in Baghdad of the Higher Committee for Health and National Safety.

At the start of the meeting, the Prime Minister told the Committee that the coronavirus pandemic challenge facing Iraq is unprecedented, and that this challenge has been exacerbated by cumulative past administrative failures.

Following discussions, the Committee decided to:

Prime Minister Mustafa Al-Kadhimi chaired on Monday a meeting in Baghdad of the Higher Committee for Health and National Safety.

At the start of the meeting, the Prime Minister told the Committee that the coronavirus pandemic challenge facing Iraq is unprecedented, and that this challenge has been exacerbated by cumulative past administrative failures.

Following discussions, the Committee decided to:

Note: According to the Public Health Committee’s decision to maintain curfew days on Thursdays, Fridays and Saturdays, trading on the ISX will be from Sundays to Wednesdays until a further announcement. 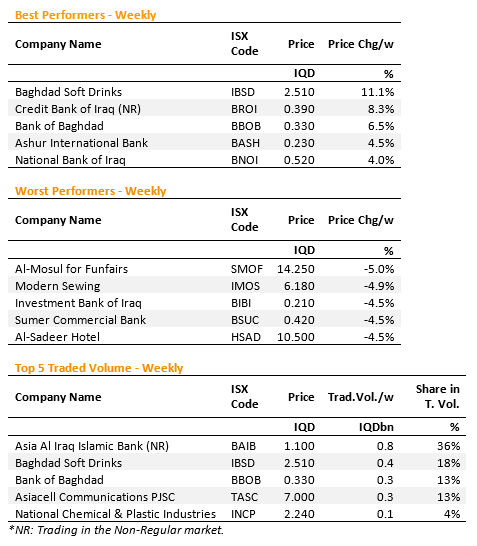 The Iraqi Cabinet held its regular meeting in Baghdad on Tuesday under the chairmanship of Prime Minister Mustafa Al-Kadhimi.

At the start of the meeting, the Prime Minister outlined the challenges facing the country in relation to Covid-19 and the Iraqi government’s efforts to combat the pandemic and provide support to health institutions and medical teams.

The Prime Minister called on all Iraqis to follow the directions of the Higher Committee for Health and National Safety, and to follow official health advice for their own safety and that of all Iraqis.

The Cabinet discussed recent protests in relation to grievances to do with the Ministries of Defence, Education and Electricity. The Prime Minister directed ministers to engage in a dialogue with the protesters in order to reach realistic solutions commensurate with their demands and with the difficult challenges facing the country.

The Cabinet discussed current economic and financial challenges, and the necessary measures to encourage and promote investment in Iraq’s economy as a key driver of growth and of job-creation.

In the meeting attended by Deputy Prime Minister Qubad Talabani and other ministers, the Prime Minister reaffirmed ongoing efforts to carry out financial reforms; organise trade, and review tax exemptions at all border crossings.

The meeting reviewed assessments from committees tasked with these areas as part of the reform agenda. The committee, headed by the Ministers of Interior and Finance, presented a detailed report on service contracts and challenges at the border crossings.

During the meeting, the Prime Minister underscored the cabinet’s priority to bring more certainty to the use of public wealth. He also noted the important role of the private sector and the need to promote local produce.

The meeting called for border crossings to be organised in accordance with international standards; stop illegal tax exemptions, and a review of all of service contracts.

KRG Prime Minister Masrour Barzani on Wednesday chaired a meeting with the government’s high-level committee on the coronavirus outbreak via video conference.

In the meeting attended by Deputy Prime Minister Qubad Talabani, the Minister of Health presented a detailed report on the increasing number of infections and fatalities in the Kurdistan Region due to a recent surge in Covid_19 cases. The Minister of Interior then presented a report on government measures to enforce compliance with the government’s health advice.

Following an exchange of views on how to curb the spread of the disease, the government’s committee on coronavirus made the following decisions:

Prime Minister Mustafa Al-Kadhimi chaired a meeting of the Higher Committee for Health and National Safety on Saturday.

At the start of the meeting, the Prime Minister paid tribute to Iraq’s health teams and security forces and thanked them for their hard work during the Covid-19 health emergency.

The Prime Minister called on all Iraqis to remain vigilant, abide by the curfew, follow official health advice and physical distancing rules, and avoid gatherings.

Following discussions, the Higher Committee for Health and National Safety decided to:

Extend the nationwide curfew until Saturday 13/06/2020

Impose a curfew for 24 hours a day every Thursday, Friday and Saturday

Maintain the ban on all gatherings in all their forms

Maintain the ban on travel within provinces

The Committee also decided that:

The Government of Denmark has committed DKK 6,000,000 (approximately US$870,000) to support the Government of Iraq’s response to the global COVID-19 pandemic, in partnership with the United Nations Development Programme (UNDP) in Iraq.

The funds have been pledged under UNDP Iraq’s overall COVID-19 response package which is administered under the Funding Facility for Stabilization (FFS) and includes increasing the testing capacity of laboratories, providing personal protective equipment to healthcare workers, increasing the number of isolation wards, promoting social cohesion, and undertaking assessments to establish post-COVID-19 recovery strategies.

Denmark’s contribution will largely focus on supporting local peace committees – established by UNDP with Denmark’s support in 2018, to promote social cohesion, peace and stability in Iraq post-ISIL – to respond to the pandemic. Funds will also be used to boost the capacity of youth and women’s community groups to address social issues like stigma and discrimination among communities.

“The Danish support for Iraq’s COVID-19 response is a part of our continuous support for peace and stabilization in Iraq. It is very encouraging to see how local community groups are stepping up in response to the COVID-19 pandemic – and I applaud the tremendous work carried out by both UNDP and these community groups, which is essential in our common efforts to curb the spread of the virus”.

“The support of community groups in managing the COVID-19 pandemic has been invaluable. Local peace committees, along with community youth and women’s groups, have taken the initiative to protect their own communities from COVID-19 through initiatives such as sterilizing public spaces, providing food baskets for vulnerable families, and setting up mobile health clinics.

“These activities help to curb the spread of the virus but at the same time promote more cohesive communities. We’re grateful to Government of Denmark for this generous contribution and their continued commitment to a peaceful Iraq.“

Denmark is a key partner for UNDP Iraq, providing more than $58 million for stabilization, social cohesion, and security sector reform activities since 2015.

Prime Minister Mustafa Al-Kadhimi chaired on Saturday a joint meeting of  the Higher Committee for Health and National Safety and the parliamentary Covid-19 crisis cell.

At the start of the meeting, the Prime Minister paid tribute to Iraq‘s health teams for being on the frontline during the current health emergency, and to Iraqi security forces for supporting Iraq‘s national effort to combat Covid-19.

The Prime Minister thanked Iraqi families for observing the curfew and complying with other restrictions during this very challenging period.

Following discussions, the joint meeting agreed a number of measures, including:

The joint meeting underscored the importance of all citizens continuing to follow official health advice and physical distancing guidelines, and to comply with the curfew to keep themselves, their families and communities safe.

A United Nations report published today on the abduction of protesters in Iraq since last October details their ordeals from the time of abduction through interrogation to acts of torture.

In its fourth report on the protests, the UN Human Rights Office of the UN Assistance Mission for Iraq (UNAMI) documented cases involving 123 people who disappeared between 1 October 2019 and 21 March 2020. Of these, 98 people were located, but 25 remain missing or are in an unknown status.

Since the protests erupted at the start of October, the UN has verified 490 deaths of activists and 7,783 injured. Most of the protesters are young and unemployed, and have been demanding that their economic and social rights be respected. The demonstrations have continued even after the outbreak of COVID-19 in the country.

The report found that the “absence of accountability for these acts continues to contribute to the pervasive environment of impunity in relation to demonstration-linked reports of violations and abuses”.

“The establishment of a high-level fact-finding committee by the new Government to investigate casualties and related harm is a crucial step toward justice and accountability,” said Jeanine Hennis-Plasschaert, Special Representative of the United Nations Secretary-General for Iraq. “The Government’s commitment to provide medical treatment for injured demonstrators and compensation to the families of victims is encouraging.”

The report notes that the abductions and disappearances occurred amid numerous incidents involving additional violations and abuses targeting activists and protesters, including deliberate killings, shooting and knife attacks, threats and intimidation, and excessive and unlawful use of force at demonstration sites.

None of those interviewed knew the identity of those responsible for their abduction, although most speculated the involvement of ‘militia’. They added that they did not believe official Iraqi Security Forces were directly responsible, nor that ordinary criminal gangs were to blame.

The report does not speculate on who might be behind the abductions, points to “the involvement of armed actors with substantial levels of organisation and access to resources”.

The report provides concrete recommendations to the Government of Iraq, including:

The report in English and Arabic: