India has created an air bubble arrangement with Iraq. Indian and Iraqi carriers are now permitted to operate services between India and Iraq and carry the following categories of persons on such flights:

A. From India to Iraq

ii. Any Indian national holding any type of valid visa from Iraq and destined for Iraq only. It would be for the airlines concerned to ensure that there is no travel restriction for Indian nationals to enter Iraq with the particular visa category before issue of ticket/ boarding pass to the Indian passenger.

B. From Iraq to India

i. Indian nationals stranded in Iraq;

ii. All Overseas Citizen of India (OCI) cardholders holding passports of Iraq; and

iii. Nationals of Iraq (including diplomats), holding valid visa issued by an Indian Mission in any category covered under Ministry of Home Affairs (MHA) guidelines dated 30.06.2020 as amended from time to time.

The Government of Iraq, in partnership with the UN Environment Programme (UNEP), has launched a process to develop a National Adaptation Plan (NAP) to build the country’s resilience to climate change.

The NAP process aims to reduce vulnerability to the negative impacts of climate change, especially in developing countries, through strategic planning based on projections of future climate change. NAPs are seen as one of the most important mechanisms for adapting to climate change.

The three-year project, funded by the Green Climate Fund (GCF) with over USD$2.5m, will support Iraq to formulate and implement its NAP, with a particular focus on strengthening institutional, technical and financial capacities to ensure that medium- to long-term adaptation needs are integrated into national development planning.

The project launch event was held virtually on 16 September, in the presence of the Ministry of Health and Environment in Iraq, the Nationally Designated Authority (NDA) committee, representatives of other Iraqi ministries, the National Committee on Climate Change, local non-governmental organizations, and representatives from UN organizations working in the country.

In his opening remarks, Dr. Jasim Humadi, Deputy Minister of Health and Environment in Iraq and National Focal Point of GCF, said:

“According to the GEO-6 report issued by UNEP, Iraq is classified as the fifth most vulnerable country in the world to decreased water and food availability and extreme temperatures, which will negatively affect food security, water security, social security and health security in Iraq. This project will support national efforts that focus on increasing Iraq’s adaptive capacity, increasing the resilience of affected sectors, increasing the awareness and preparedness of rural communities, supporting youth and women, and achieving the 2030 Sustainable Development Goals.”

A key aspect of Iraq’s NAP process is to identify, assess and bridge existing gaps in climate knowledge, as these gaps constitute barriers to long-term climate planning across local, regional and national planning processes. Climate risk assessments will be carried out to identify the livelihoods and sectors most threatened by climate impacts, as well as the most urgent adaptation priorities.

“The impacts of climate change on development in Iraq are already being experienced. This new project aims to reduce vulnerability to the impacts of climate change by strengthening the country’s adaptive capacity and preparing the ground for future adaptation planning and projects. UNEP is proud to be the executing entity for the project and remains deeply committed to its core mandate of facilitating environmental governance and working with the Government of Iraq to ensure the NAP process allows for building back better.”

“The development of this National Adaptation Plan could not be more important for Iraq as it is a country highly vulnerable to the impacts of climate change. The United Nations stands ready to assist Iraq to further strengthen institutional and technical capacities. We will make the best use of the mandates and expertise of our system to deliver as one today and beyond the lifespan of the project.”

Climate change in Iraq is expected to reduce annual rainfall, which will lead to a surge in dust storms, a reduction in agricultural productivity, and increased water scarcity. These challenges are likely to have serious impacts on the health of the people of Iraq, as well as the agricultural and industry sectors, which contribute significantly to the Iraq’s GDP.

TDT | Manama. A total of 17 million Bahraini Dinars will be transferred directly to the accounts of citizens eligible to receive cash subsidies this …

By Lujain Elbaldawi for Al-Monitor. Any opinions expressed are those of the author(s), and do not necessarily reflect the views of Iraq Business News.

As the region is witnessing a new wave of normalization with Israel, Iraqi Jews are seeking an opportunity to visit their homeland, Iraq, just as Israelis are now able to visit the United Arab Emirates.

By Michael Knights, for the Washington Institute for Near East Policy. Any opinions expressed are those of the author(s), and do not necessarily reflect the views of Iraq Business News.

Last week, Iraqi Prime Minister Mustafa al-Kadhimi led a large cabinet delegation to Washington D.C. for new sessions of the U.S.-Iraq Strategic Dialogue, topped off by the first Iraqi prime ministerial visit to the White House in over three years.

During the visit, I spoke to most of the Iraqi delegation, including one-to-one dialogue with Prime Minister Kadhimi. In my questions to many of the Iraqi leaders, I did not limit myself to the usual eliciting of future plans and predictions, which Iraqis in any case tend to dodge, recognizing that they can neither plan nor predict with confidence.

I focused on how the leaders were feeling, what their professional and personal lives were like, and what they needed from the United States and other players.

The post Inside the Kadhimi Visit to Washington DC first appeared on Iraq Business News.

The transfer is a result of the Iraqi Security Forces’ success in the ongoing campaign to defeat Daesh remnants in Iraq, allowing the Coalition to shift its focus and role. The movement of Coalition military personnel is part of a long-range plan coordinated with the Government of Iraq.

“This is truly a historic day,” said Maj. Gen. Kenneth Ekman, deputy commander of Combined Joint Task Force-Operation Inherent Resolve. “For the past six years, Camp Taji has served as a primary installation for Coalition partners to train the Iraqi Army, Iraqi Air Force, and the Qwat al-Khasah. The Coalition’s efforts have enabled the Iraqis to train themselves. From this day forward, the ISF will take full responsibility for the facilities and programs at Taji and continue to use the site to lead and conduct training as part of the mission to defeat Daesh remnants.”

Camp Taji has historically held up to 2,000 Coalition members, with the majority departing over the summer of 2020. Major elements based at Camp Taji over the years included a Spanish helicopter battalion and military trainers from Australia, Canada, Finland, Germany, Hungary, Italy, Netherlands, New Zealand, Poland, Turkey, United Kingdom, United States and NATO.

This ceremony marks the eighth transfer of the Coalition portion of an Iraqi base under the partnership between the Iraqi Security Forces and the anti-ISIS international military Coalition.

“This is what success looks like,” said Australian Brig. Gen. Simon Johnstone, CJTF-OIR director of strategy, plans and assessments and senior Australian officer in the Coalition. “The transfer of bases like Taji is part of our campaign plan for the ISF to secure their own future and defend Iraqi sovereignty. The tremendous efforts by the ISF and the Coalition demonstrate our shared commitment from the Coalition and Australia to ensure safety, security and stability for Iraqi citizens.”

Numerous improvements were made to the Iraqi base, which served as a premier training venue for the anti-ISIS forces. The Coalition transferred $347 million in equipment and property to the Government of Iraq. This was the highest dollar figure of any base transfer. Base improvements and divestments include airfield and runway renovations, modular aircraft shelters, infantry training ranges, vehicles, and more than 90 million rounds of ammunition.

Remaining Coalition troops will depart Taji after completion of equipment transfers to the ISF in the coming days. 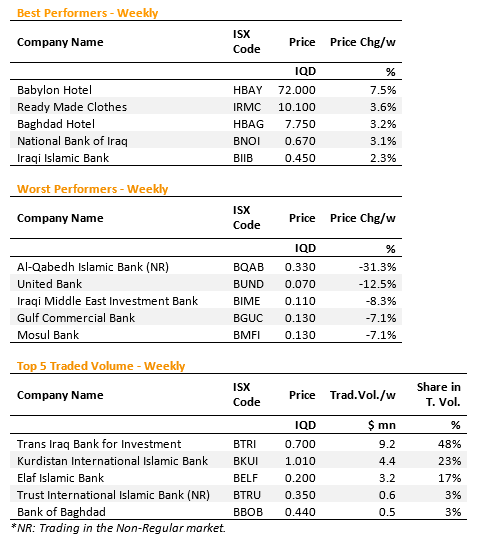 If you’re an exporter looking to ship goods into Iraq, you’ll need to get a Certificate of Conformity (COC) or Certificate of Inspection (COI). But what exactly does that mean and why are they important?

International exporters around the world are taking advantage of Iraq’s increasing demand for imports. The country took in US$45bn worth of goods in 2018, and that number is expected to rise over the next few years as wealth is generated and reconstruction plans continue.

But while the opportunities in the region are exciting for exporters doing business in the Middle East, there are important procedures they need to follow before tapping into the growing market.

An Iraq COC is now required for over 1,000 products across a range of categories before they can enter the country’s lucrative imports scene. The measure dictates that all imports must submit the certification via an authorised third-party inspection agency.

If the exporter needs to issue a certificate for products outside the scope of COC, they can apply for a COI, a one-time customs clearance document applied to each individual shipment.

The goal is to limit noncompliance, as well as the importing of counterfeit or defective products, thereby protecting domestic consumers, producers and manufacturers, while also being good for the environment.

HQTS Group is one of only three companies currently licensed to provide COC services and offers a simple approach to getting it done fast and efficently.

Find out more and guarantee a smooth arrival for your product.

The Algerian dinar has dropped after almost 24 months of stability, raising citizens' concerns about the fall in purchasing power, especially when they …

By Omar Sattar for Al Monitor. Any opinions expressed here are those of the author and do not necessarily reflect the views of Iraq Business News.

The heat wave in Iraq has raised the ire of citizens in the central and southern areas, pushing many to take to the streets once again.

The popular protests in the squares had settled down due to the coronavirus pandemic, but the searing hot weather and declining hours of electricity supply have forced the new government to once again face the protesters.